After having breakfast at Beit Bracha with 10 of the volunteers that work there we headed up North to the border of Lebanon and Israel.  This is where Tel Dan is - the ruins of the city of Dan (one of the 12 tribes of Israel - Joshua 19:47).  Some of the walls that were built by the Israelites were amazing.  It really gives you an idea of how hard it would be to capture a fortified city, or bring the walls tumbling down. 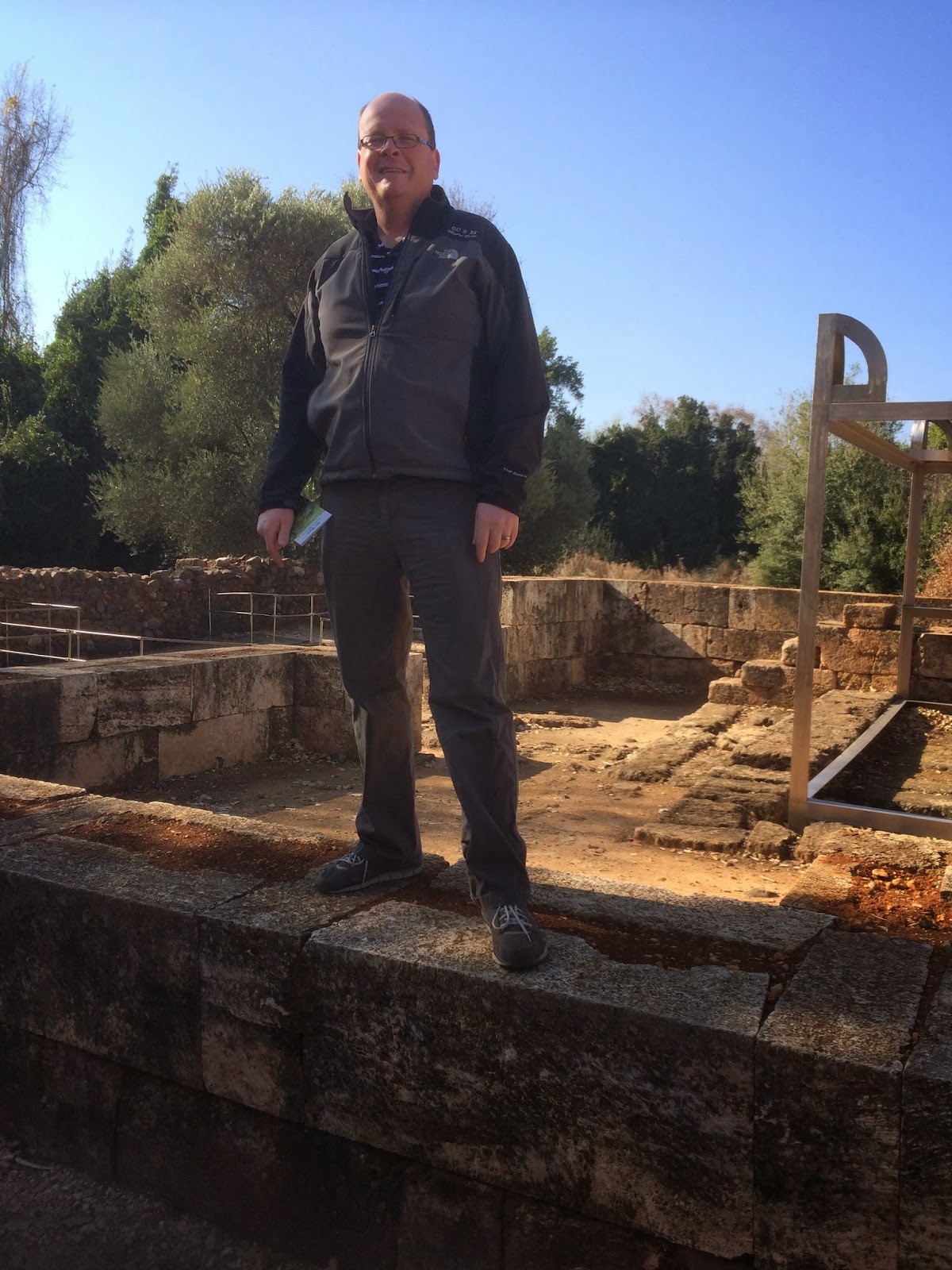 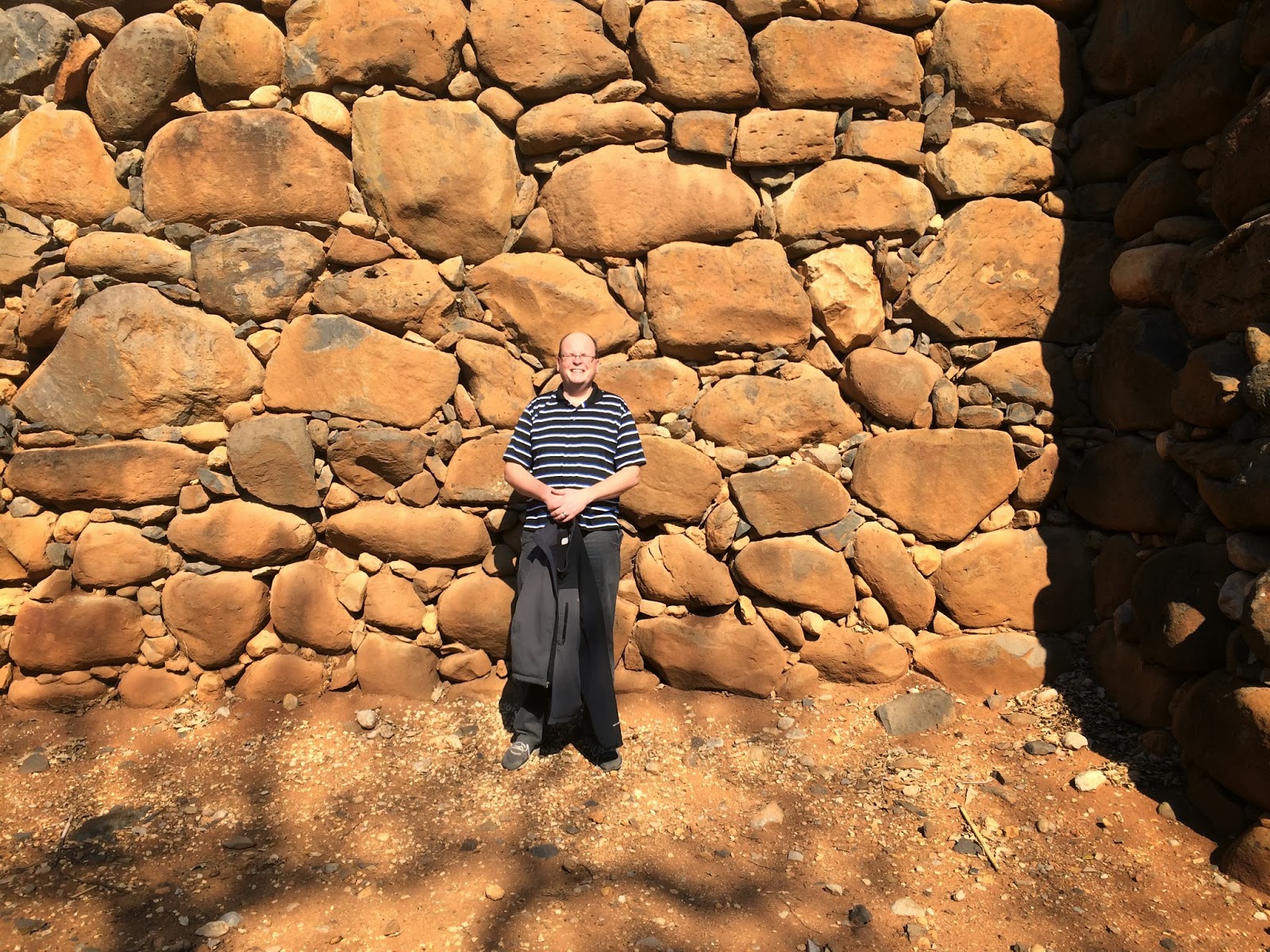 Here I am standing at one of the Hebrew high places that was built by Jeroboam when the Kingdom of Israel was split apart.  A golden calf was placed in this area for the locals to worship.  This was a great sin that Jeroboam had led Israel in committing - 2nd Kings 10:29.
The amount of remains that has been uncovered he was amazing.  We also saw trenches that were built by the 20th century Israeli army right beside the remains to help them hold the area against attackers.  Lebanon is within eyesight from this ancient town. 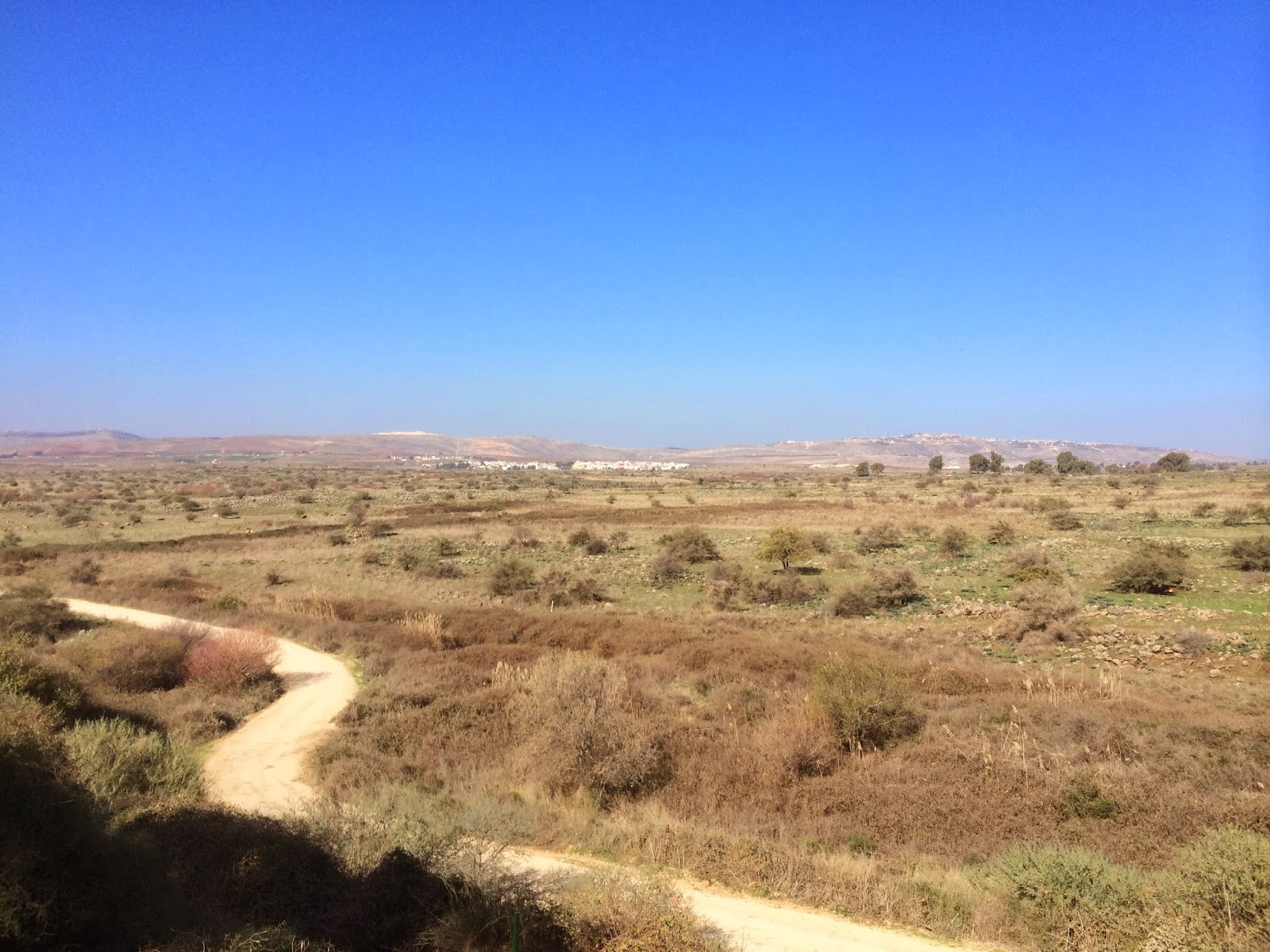 Here is the spot where the judge of the city would sit and make judgements.  It was outside the city gate. 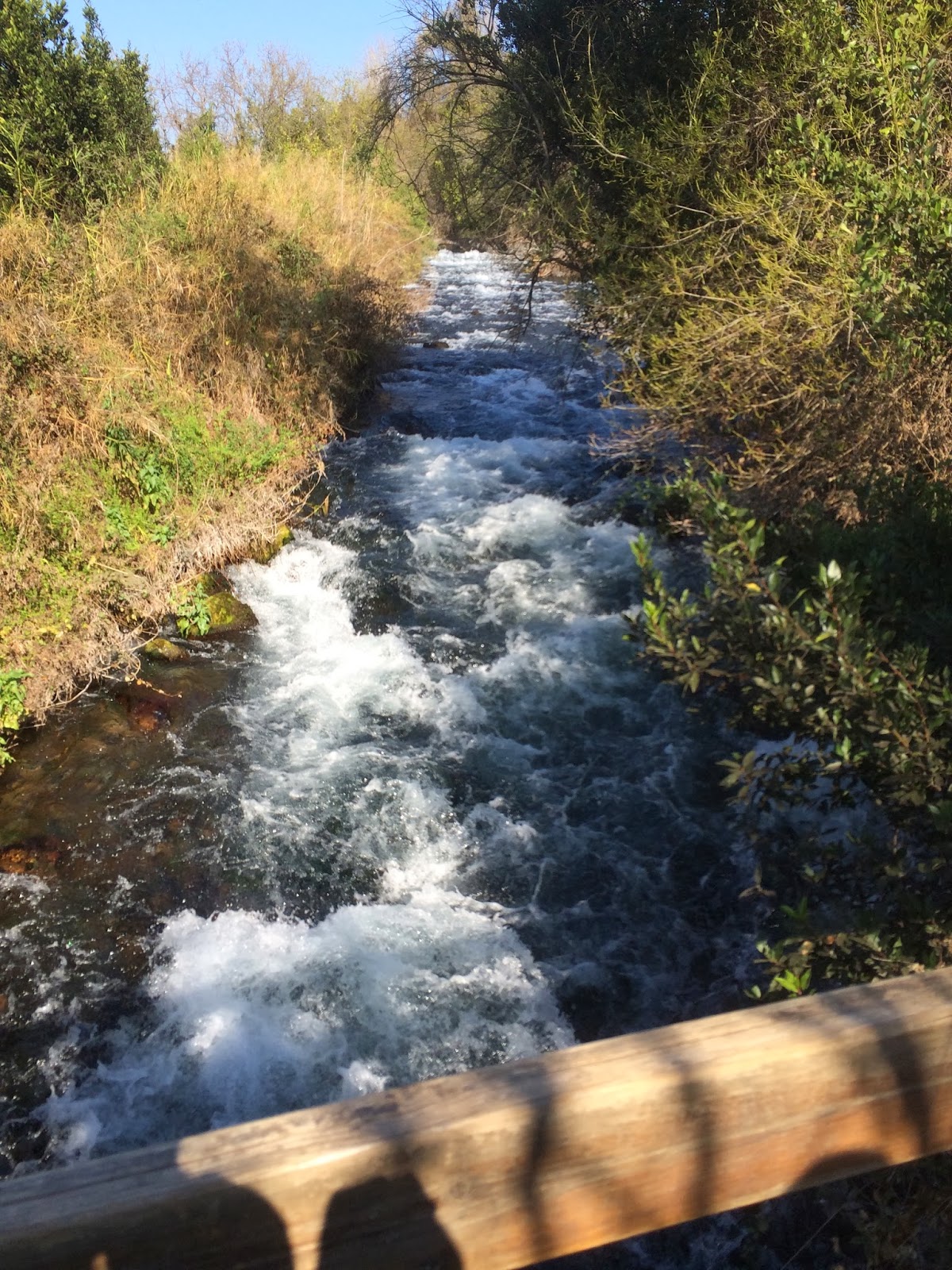 The Dan Spring is one of the main tributaries into the Jordan River, providing water to the Sea of Galilee which also flows to the Dead Sea farther south.
This was an amazing place to be.  It is also great going with my own personal tour guide named Chad.  He has studied so much of the history and has a desire to see it all as one history.  He understands how it is intertwined and gives so much valuable insights at each spot.
Next stop was Caesarea Philippi.  This is a place that we know Jesus went to.  In Matthew 16:13-20 Jesus asked his disciples while here who people said he was.  After saying John the Baptist, Elijah, Jeremiah or one of the other prophets, Jesus asked "Who do YOU say that I am".  Peter says "You are the Living Messiah, the Son of the Living God."
Jesus responds with "You are blessed, Simon son of John, because my Father in heaven has revealed this to you.  You did not learn this from any human being.  Now I say to you that you are Peter and upon this rock I will build my church and all the Gate of Hades will not conquer it.  And I will give you the keys of the Kingdom of Heaven, and whatever you open on earth will be opened in heaven." 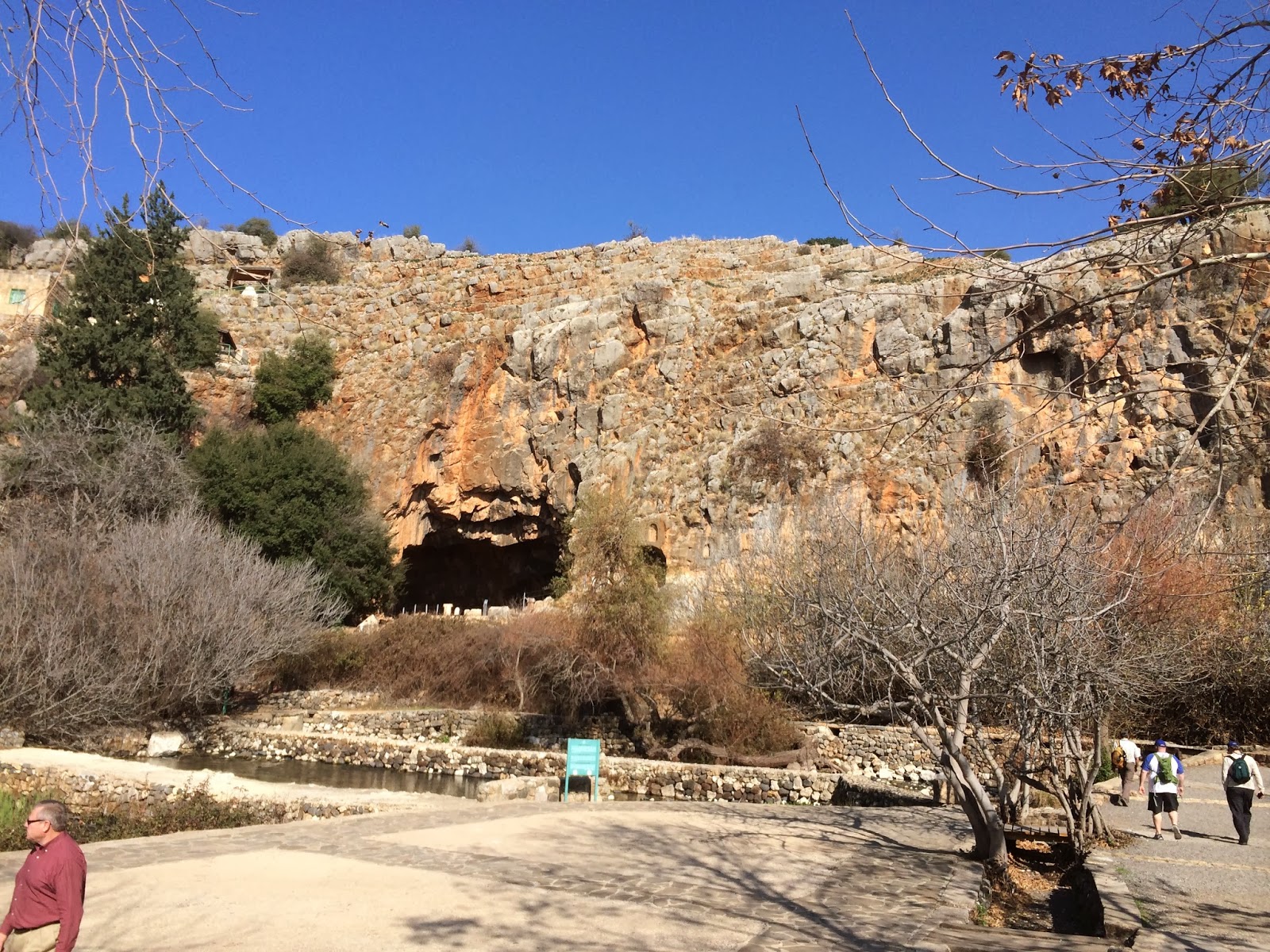 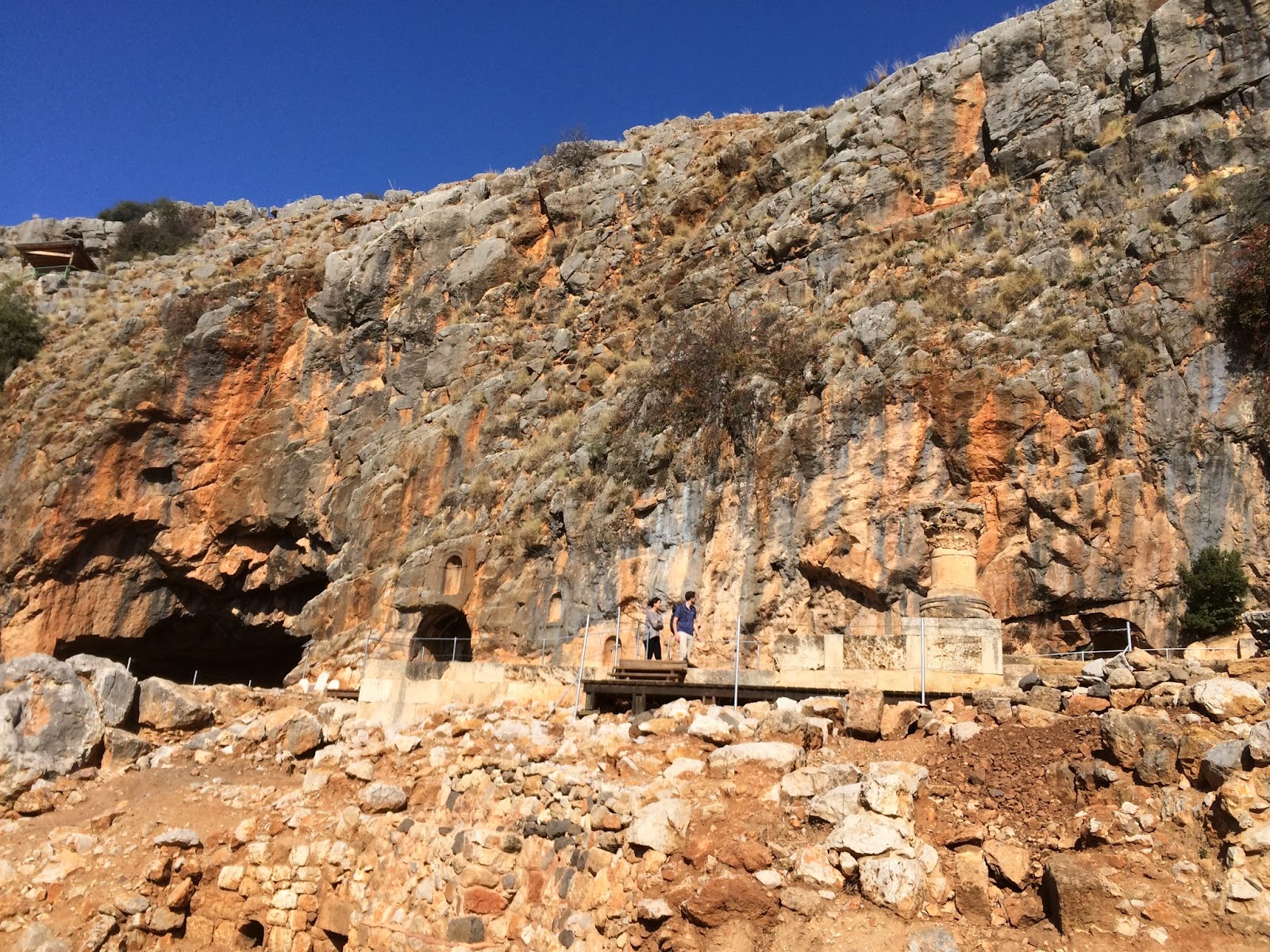 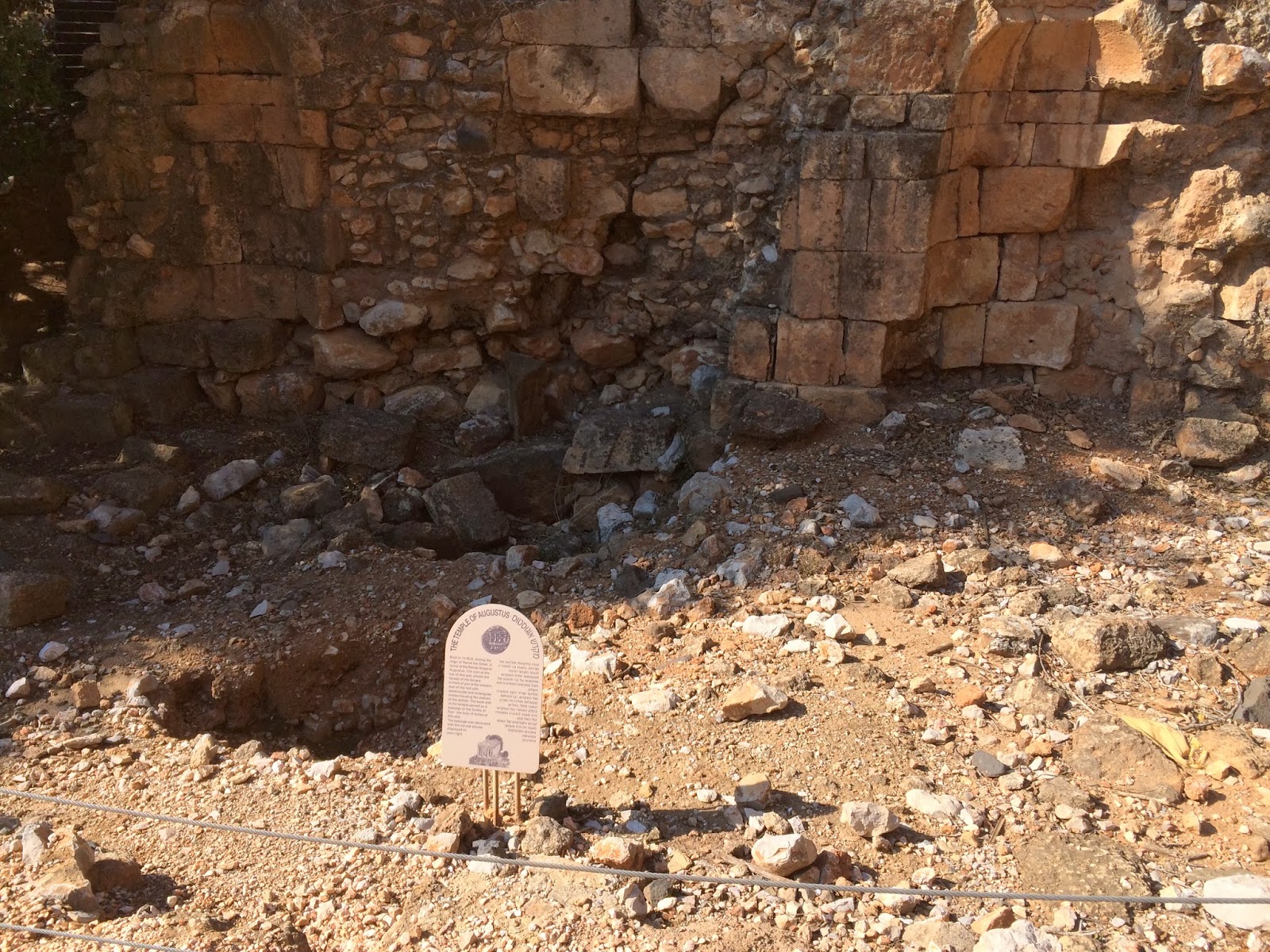 I believe I was standing close to where Jesus was when he said these words.  As you can see, the magnificent rock formation in this picture.  Peter upon this rock I will build my church!
As well, Jesus could have pointed to the cave in the rock as the Gates of Hades, as a lot of cultic activity was happening in this cave.
Next we went for a great lunch close by at a Lebanese Restaurant.  I had kabobs dipped in hummus, pita bread, egg plant, and  a lot of other vegetables.  The food tour is going very well!
Next stop was Tel Hazor a large Canaanite development that would always give trouble to the tribes of Israel.  Chad believes that Deborah and Barak destroyed the town when fighting the King of Hazor.  Later Solomon built a Palace here and the remains of the Gate have been exposed.
King Ahab also dug deep down to a spring to provide water for the city in case of a siege.  It is pretty remarkable for them to do this 3000 years ago. 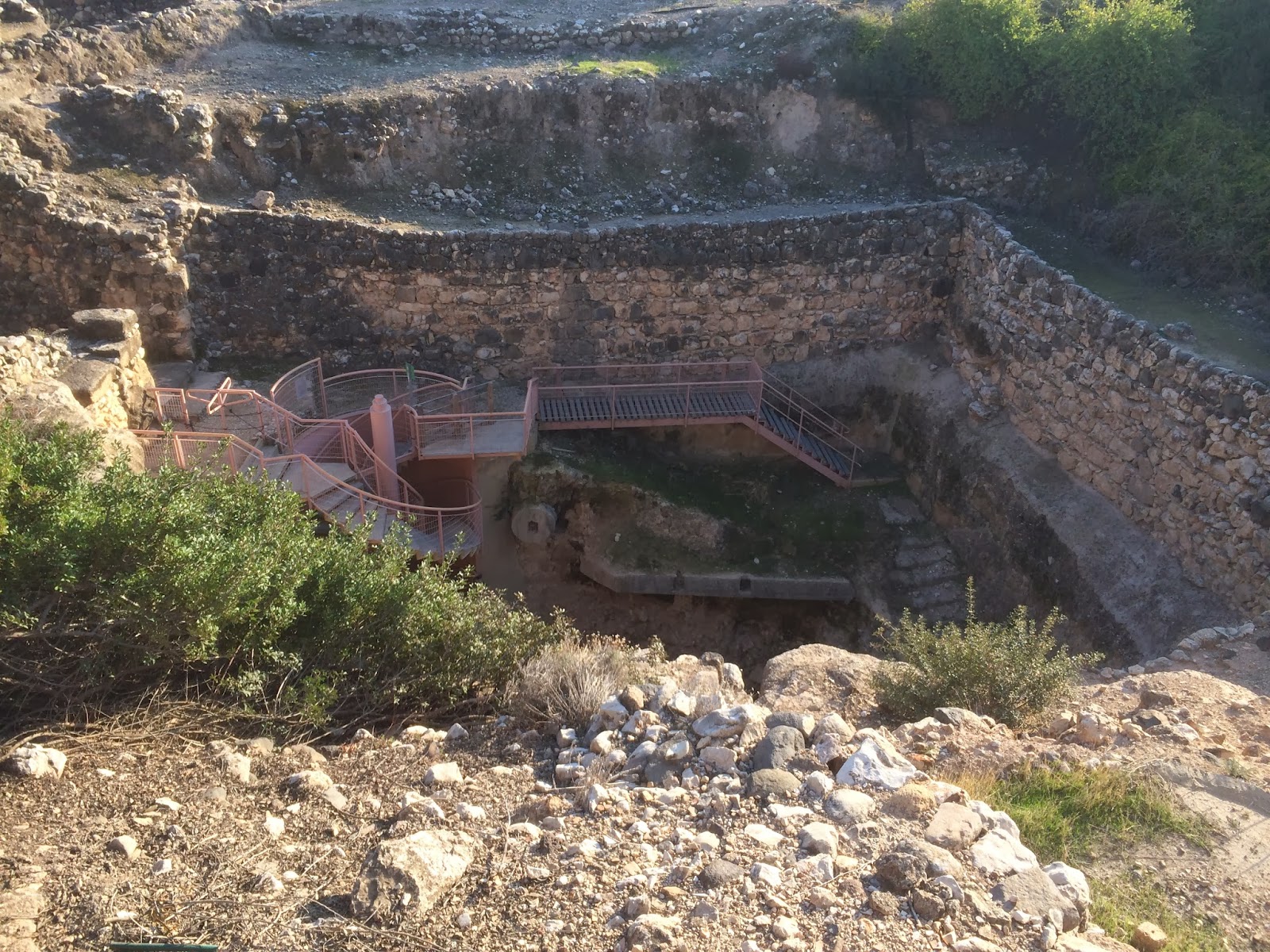 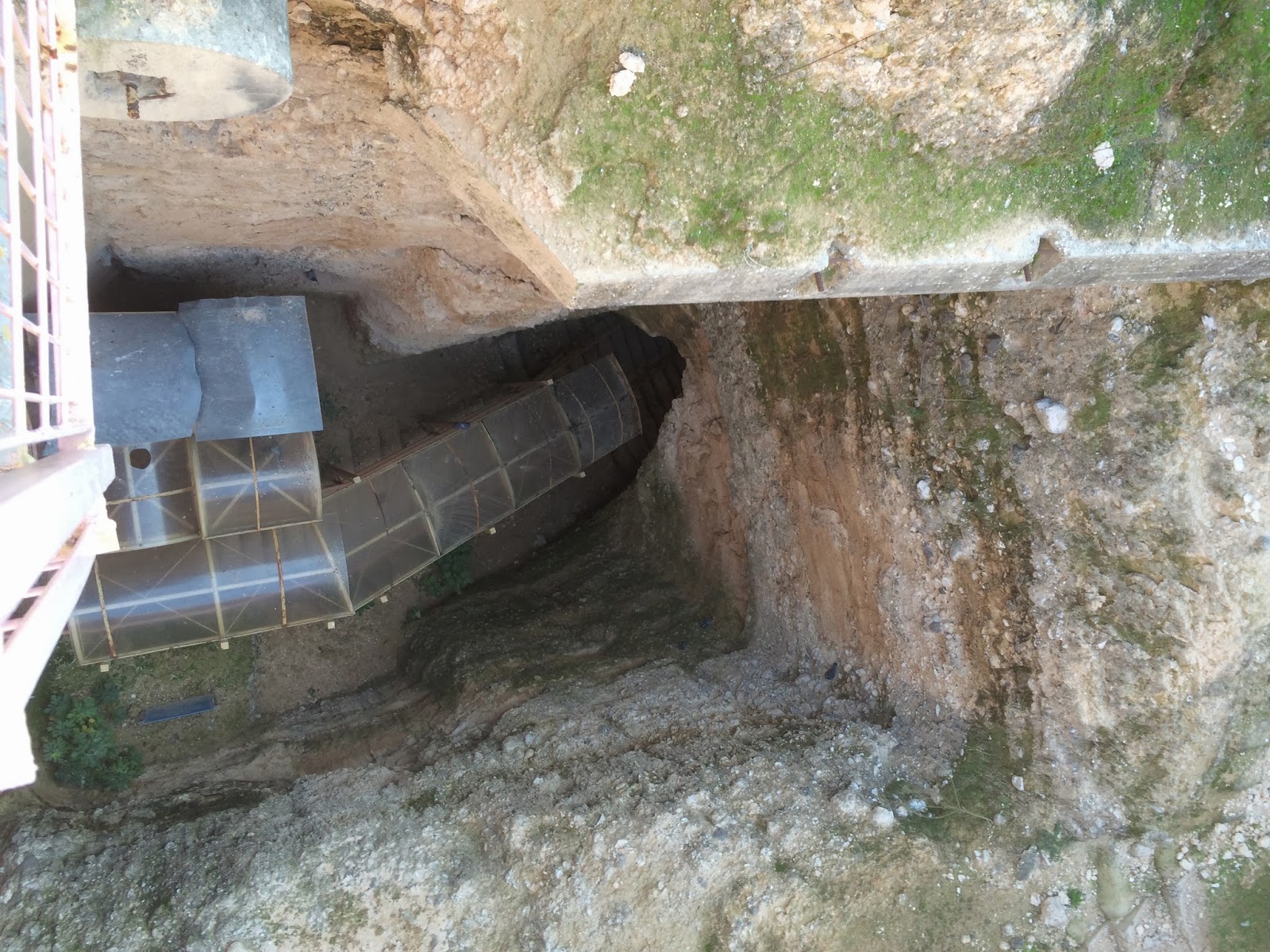 Towards the end of the day we went to Capernaum.  Many feel that Jesus made this town on the coast as his home base.  There is a Catholic church built over top the home of Peter.  This modern building was the third church built on the site that we know of. 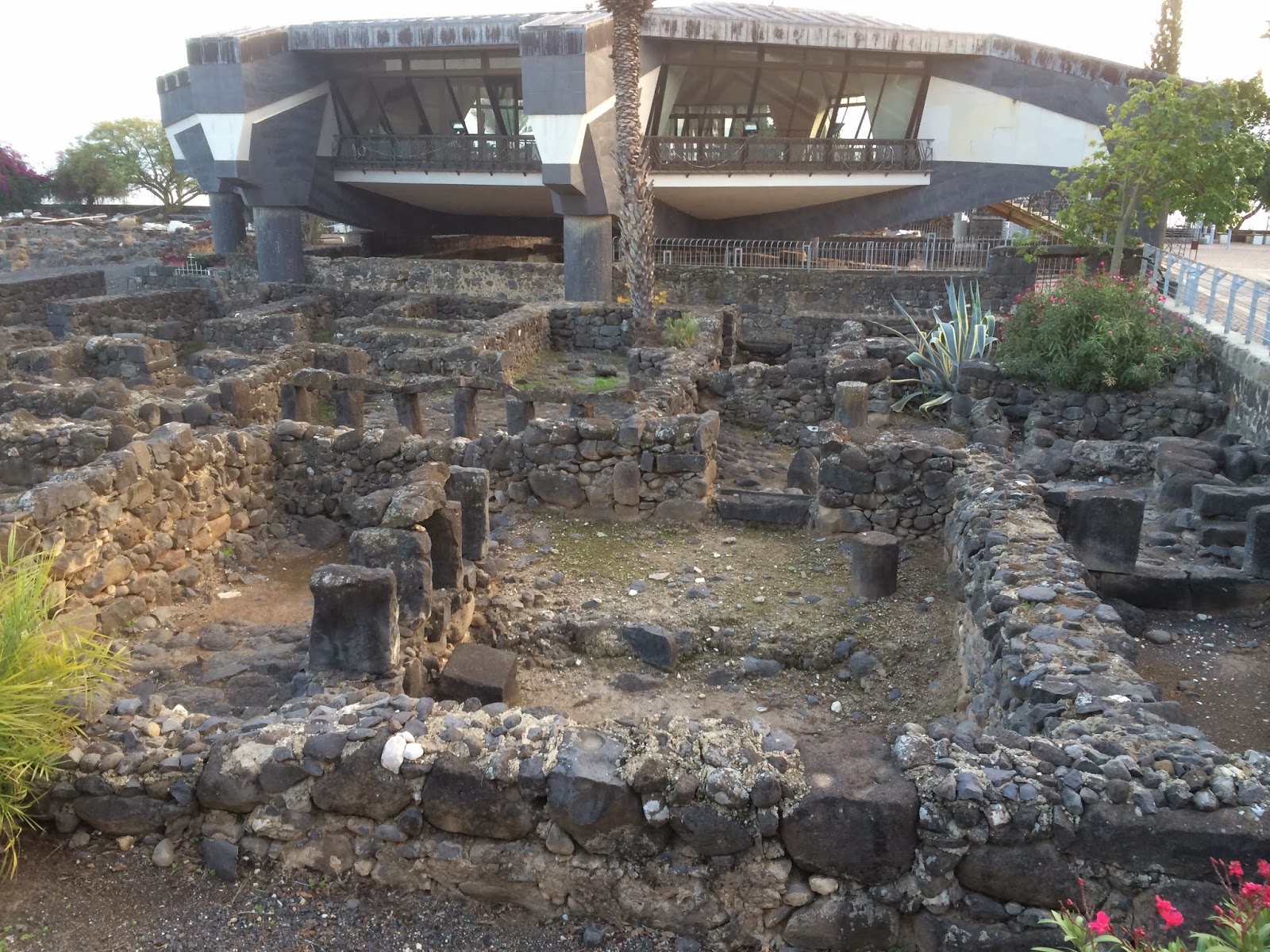 We saw the Synagogue in Capernaum that was a few hundred feet away from Peter's house.  As it says in Mark 1:21 and on, Jesus taught in this synagogue every Sabath.  Later on in the chapter, it talks about how Jesus left the synagogue and went over to Simon (Peter)'s home.  Jesus spent a lot of time in Capernaum and the towns in the Galilee area. 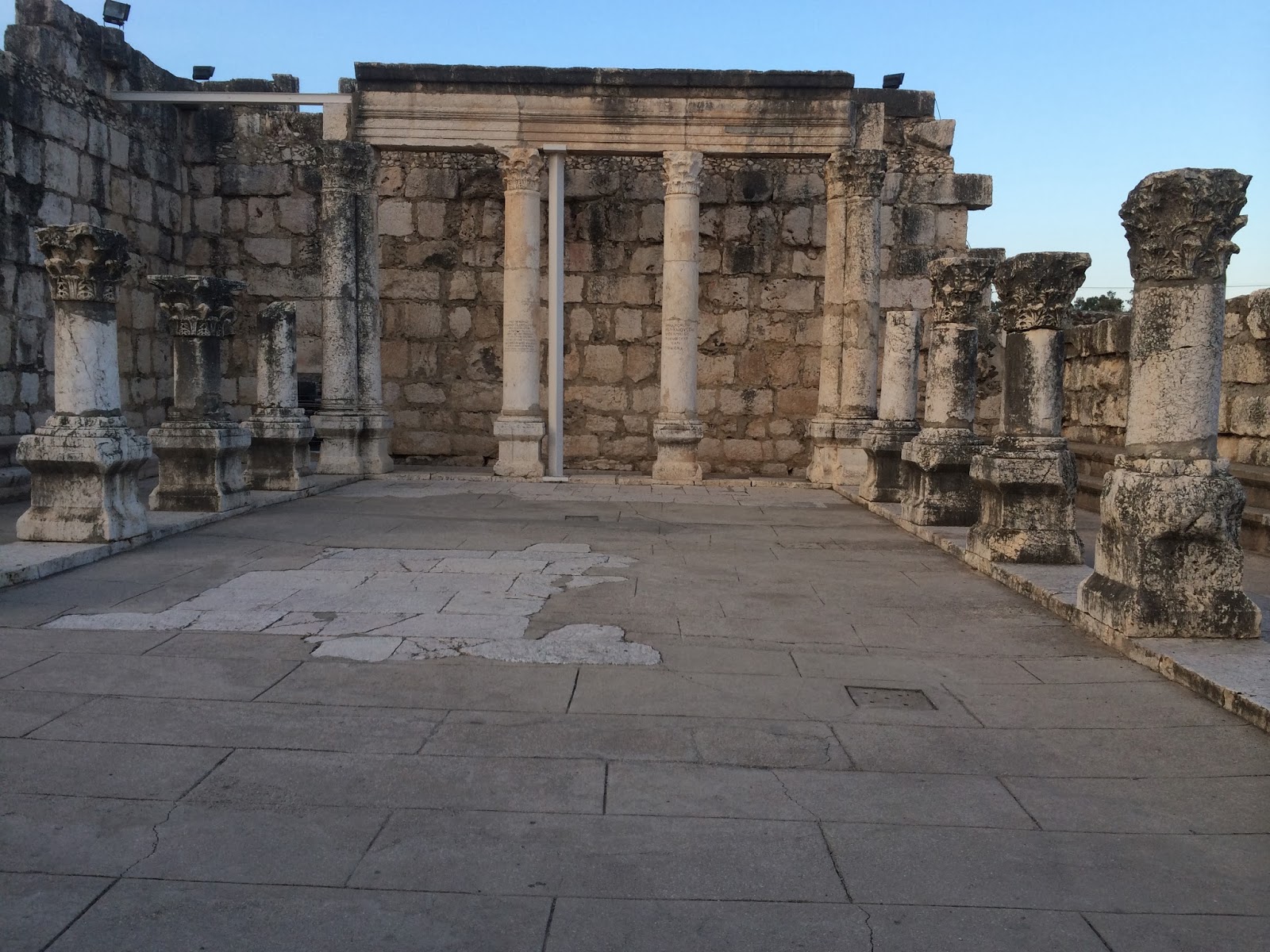 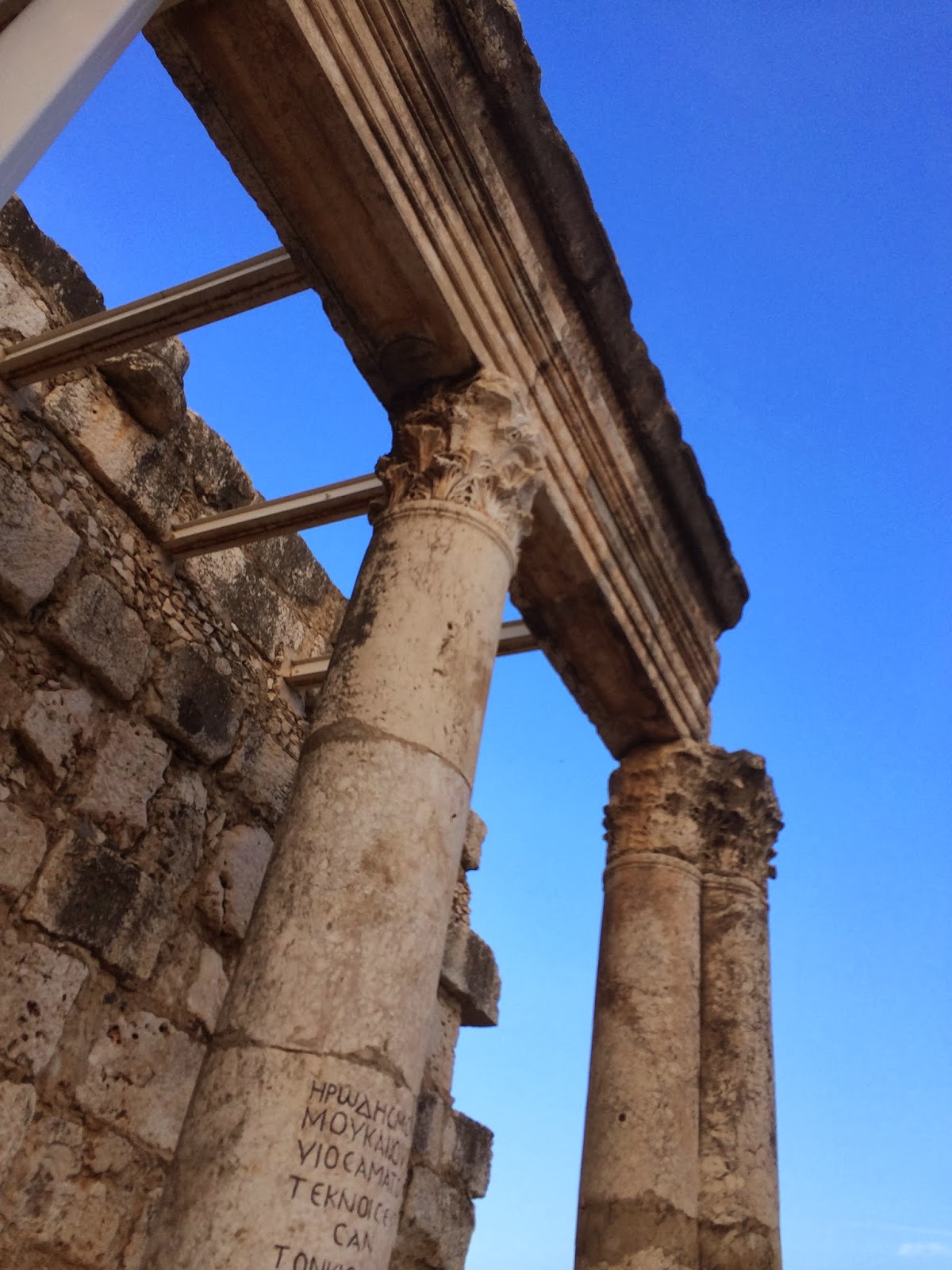 The remains of the synagogue that you see here was one built by the Byzantines in the 4th Century.  It was on the same floor as the one doing the time of Christ.
Lastly, we saw a Roman Mile Marker.  They were placed every mike on a Roman Road to help people know how far they have come or need to go.  They are referred to by Jesus in the Sermon on the Mount when Christ say if a Roman Soldier asks you to carry their load one mile, you carry it two. 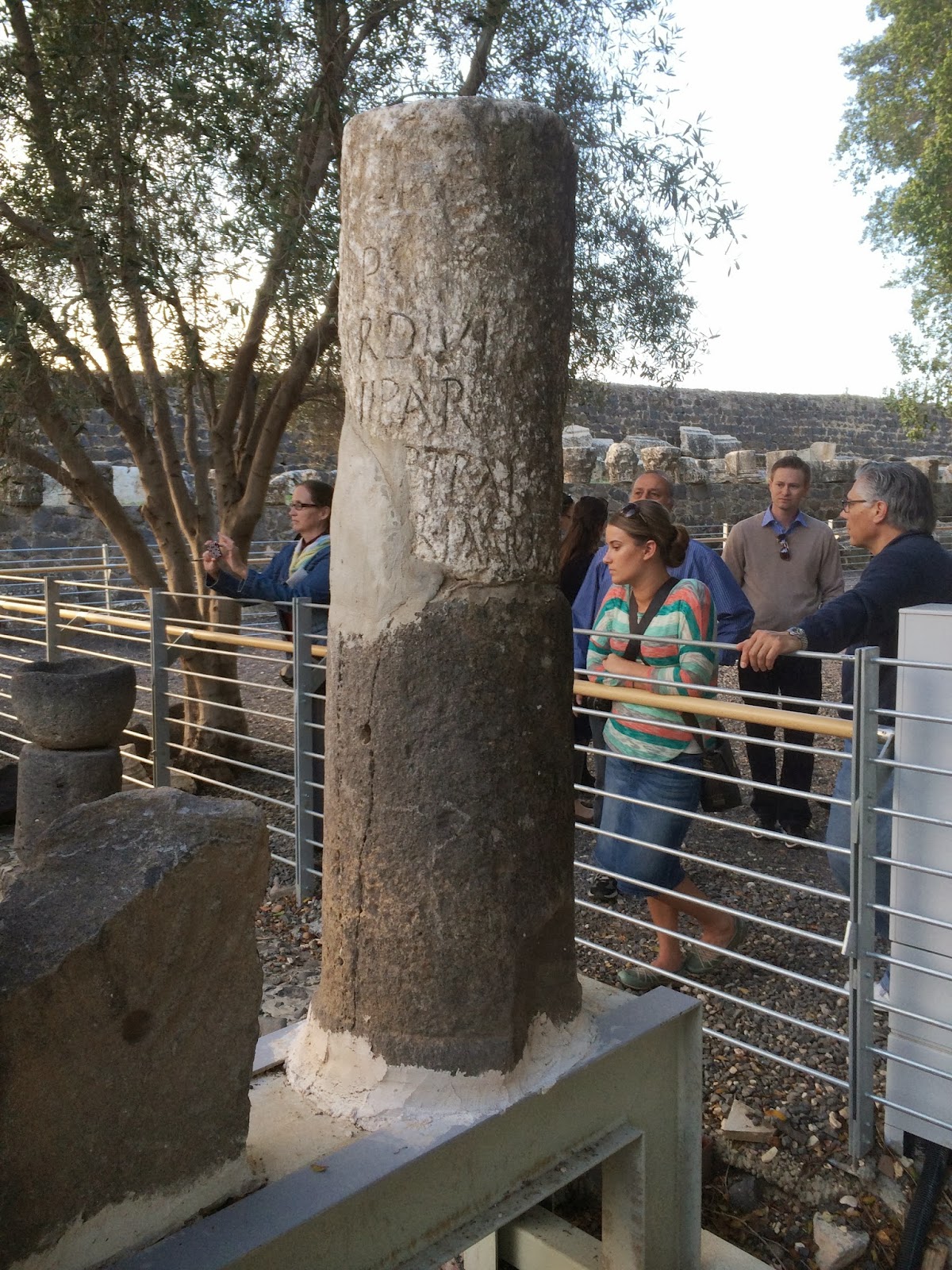