Today was another day of adventure.  After having breakfast at Casa Nova, the Catholic Retreat House, we headed out to see the City of David.  These are excavations that are happening on the site of King David's Palace.  There was a 3D Movie that took you back into the time of David and told the story of how he conquered the Canaanite city.  A palace was built to show the power of Israel during the time of King David. We saw walls that were the remains of the palace. 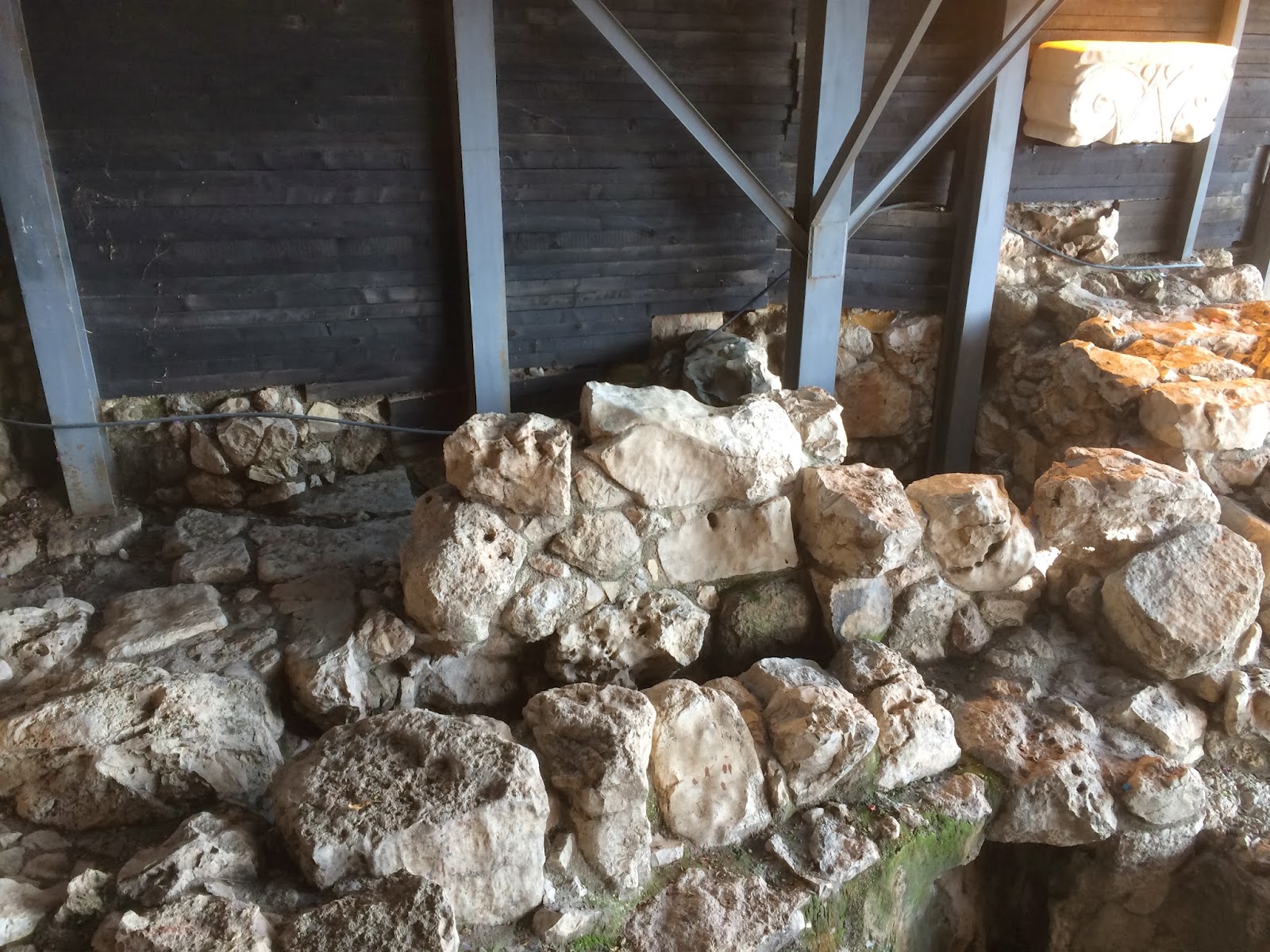 Then the adventure really started, hiking through Hezekiah's Tunnel.  They were chiseled out 2800 years ago to divert the water inside the walls of Jerusalem - 2 Kings 20:20. This would allow for stronger protection. 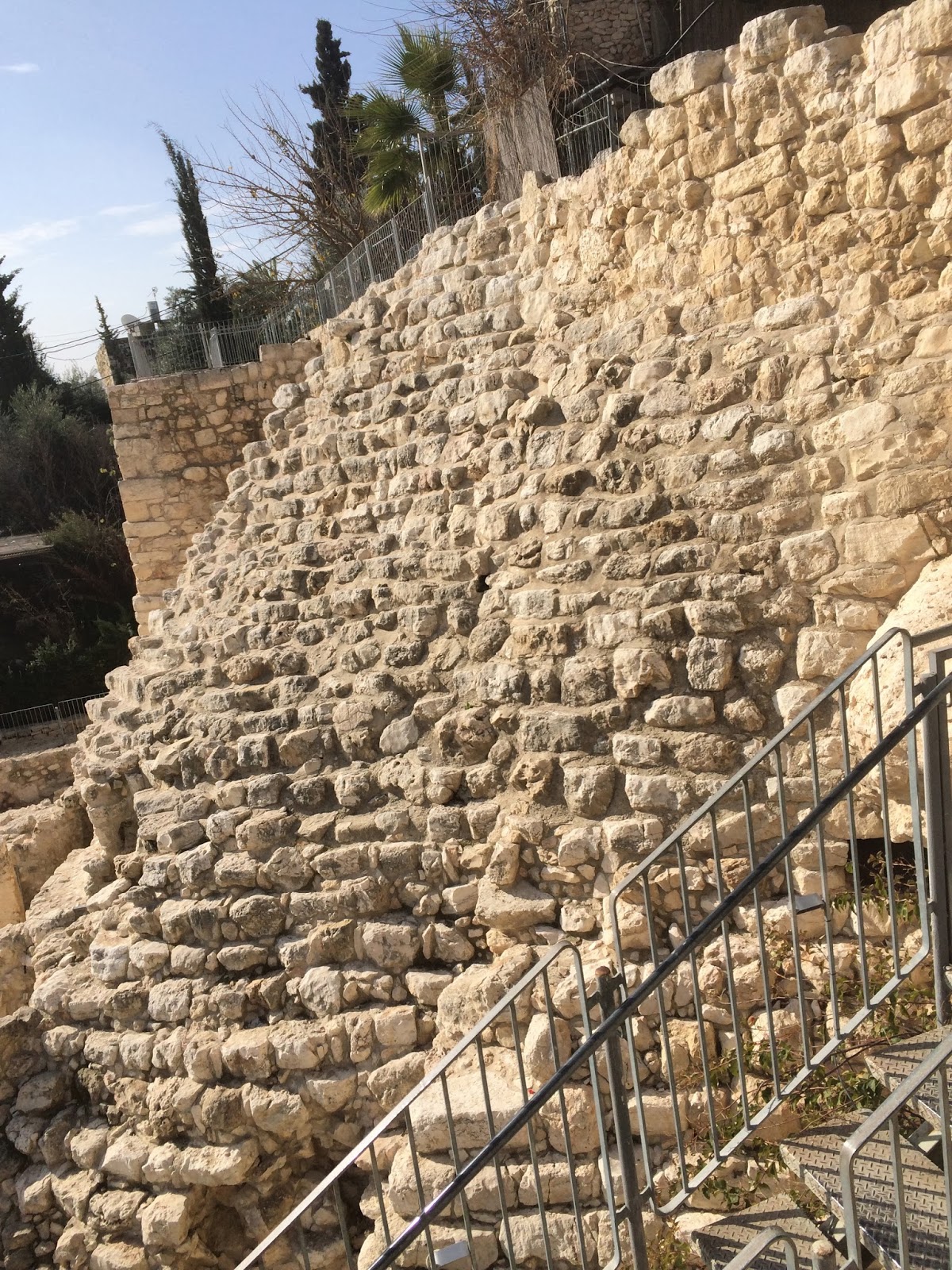 As we were going toward the tunnel we saw the base of the wall for the palace of King David.  Archaeologists feel that this stonework was placed by the Canaanites to shore up the hillside.  It is amazing what was done by hand around 3500 years ago!
Then we started our descent down to the tunnel - it started quite deep underneath the City of Jerusalem.  The length of the tunnel is 500 meters with a width of not much more then 2 feet.  At times it is 5 feet high, at times over 10.  It was also completely dark inside!  As well, there was water flowing through, as deep as  2 feet at times.  It was an adventure!  In the middle, as only Chad and I were in the tunnel, I began thinking, what if I were to sprain an ankle, or worse have a heart attack in here.  I quickly started praying to God to take those thoughts away!  I know where the saying "I see the light at the end of the tunnel" comes from now. 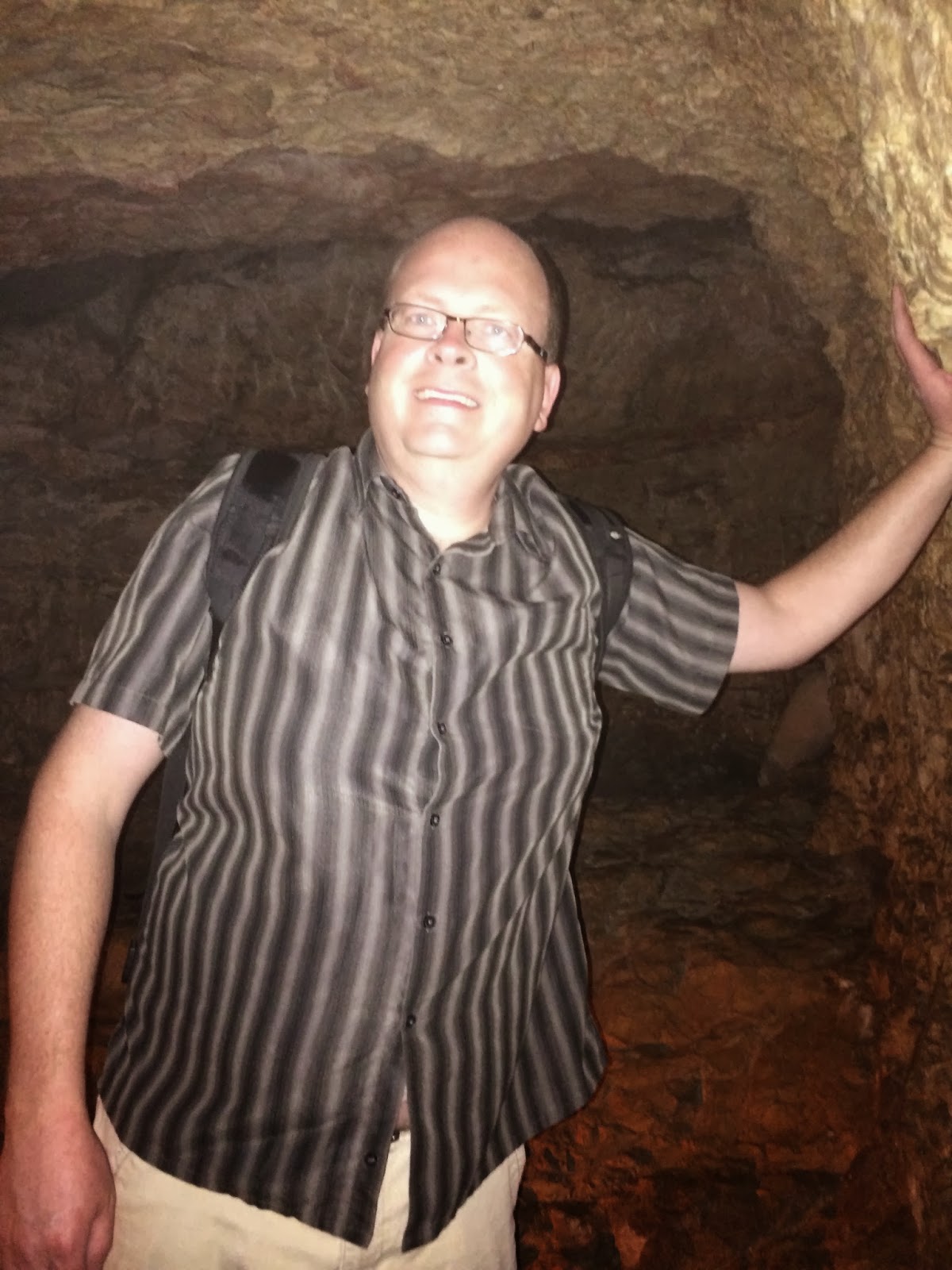 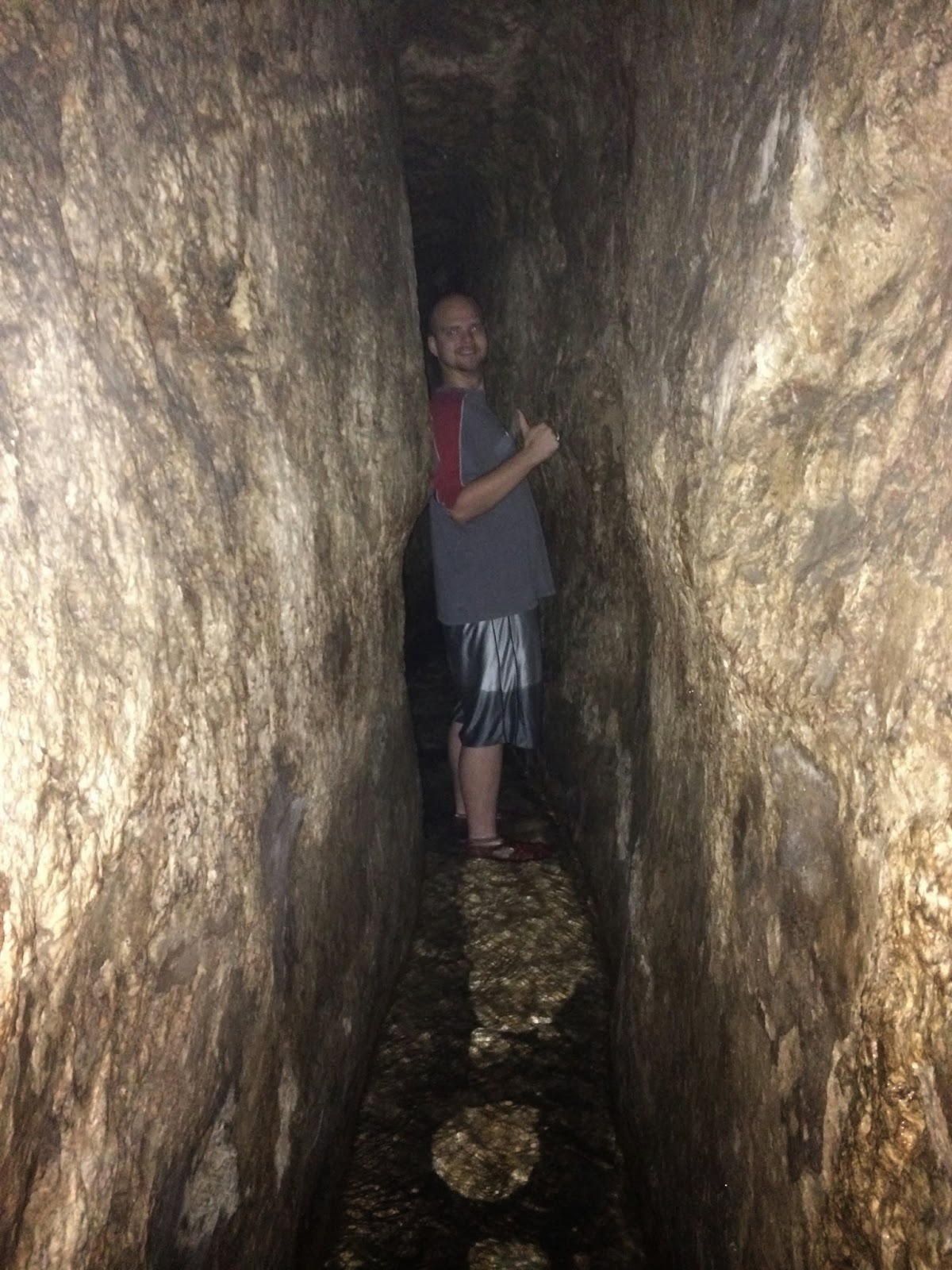 The most glorious part is coming out of the tunnel and being at the Pool of Siloam - the same pool referred to in John 9:7 where Jesus sends the man who is blind from birth to wash off the mud from his eyes.  That was beautiful - to be at a place where another miracle of Christ was formed. 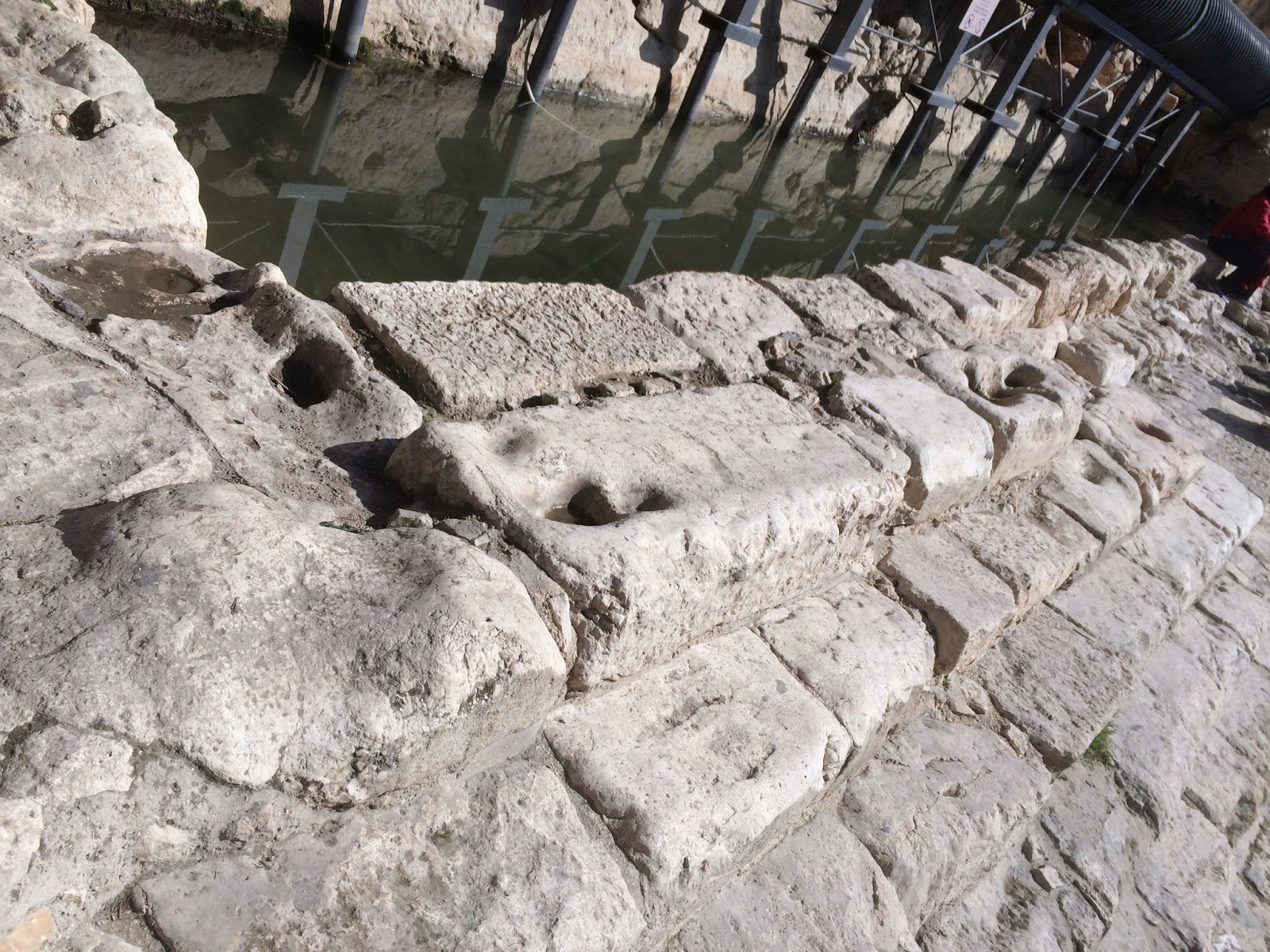 For lunch we met with Rachelle Friesen - daughter of Ray and Sylvia Friesen - who is serving at the West Bank for MCC.  She spends a lot of time giving people tours of the West Bank so people can understand the injustices that are going on there from the State of Israel. 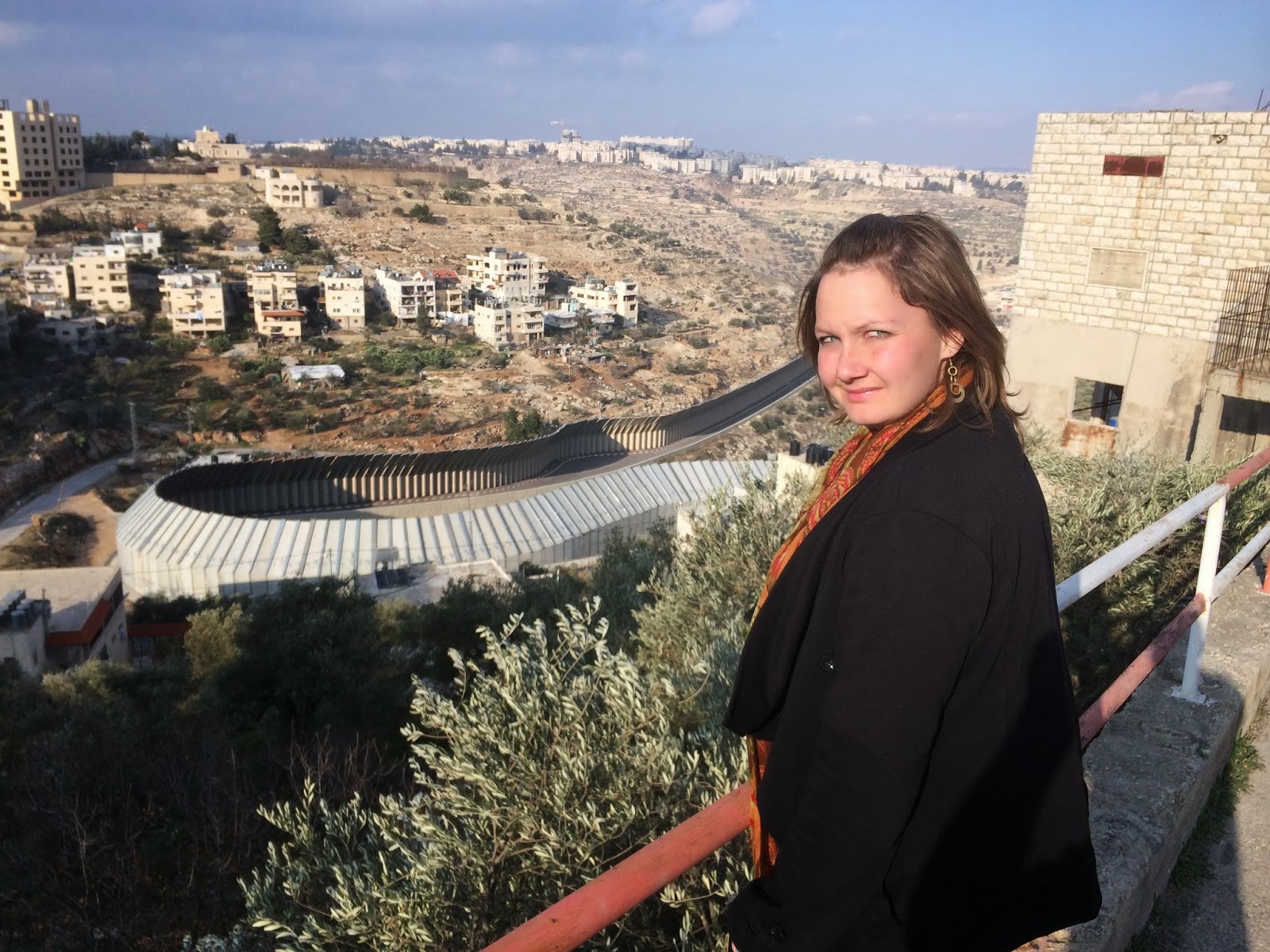 Then Rachelle offered to give me a tour of Bethlehem and the West Bank.  I said yes even though my mom did not want me to go - sorry.  One of the first things that you see when you enter the West Bank is the walls that are all over the place. 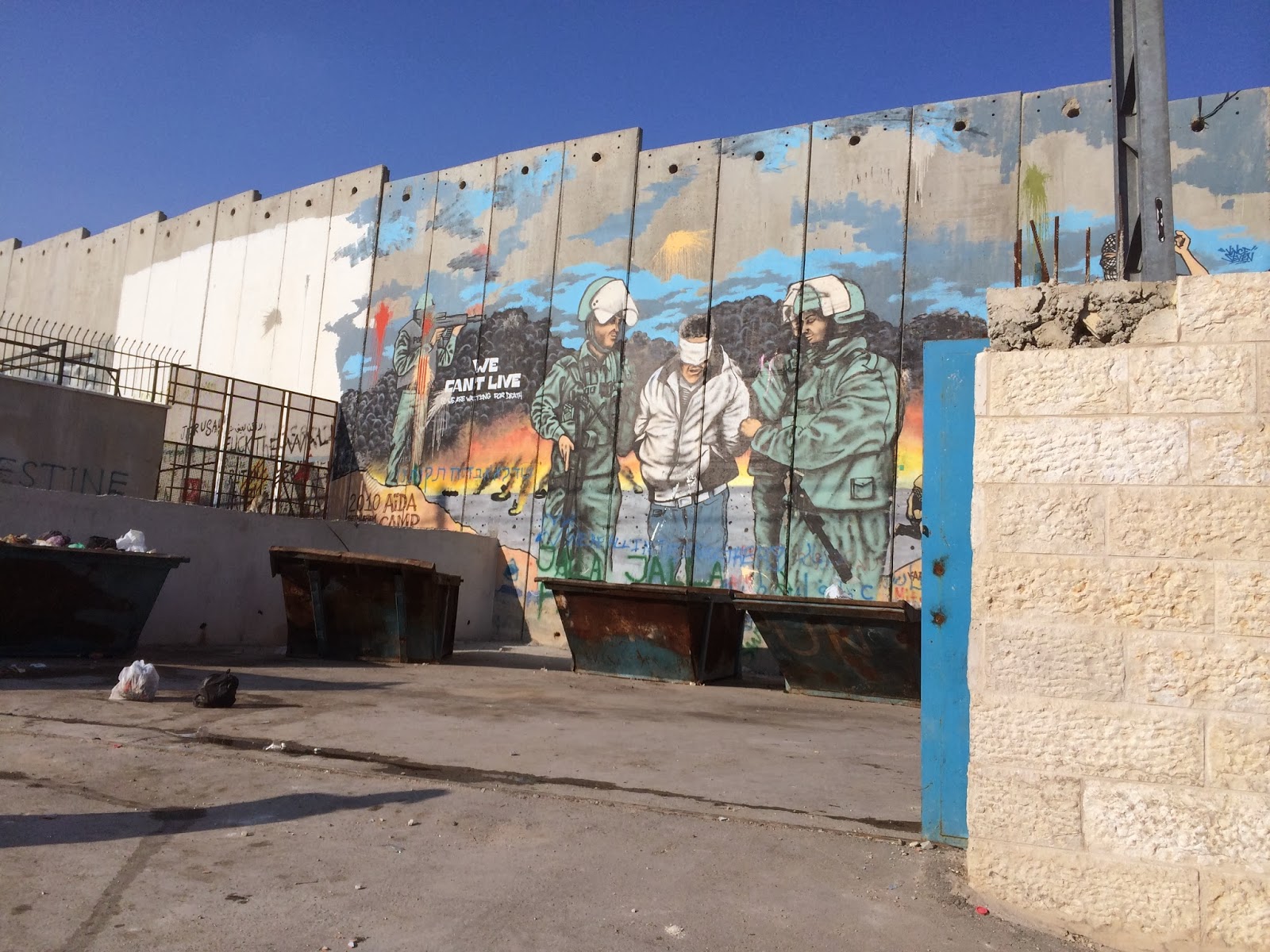 The walls have been erected by the Nation of Israel to protect their citizens from suicide attacks from a very small minority in the Palestine territory.  Because of this, the people of Palestine have to suffer.  They are treated different in the courts, need to store water on rooftop tanks just in case water is cut off for awhile, have highways and walls all over their territory that they cannot cross.  Have rubber bullets and tear gas fired at them if the teenage boys decide to throw rocks at the wall.  They don't even have data plans for their phones because Israel will not allow it in!  Even in the land that they have from Israel, there are Israeli Settlers that take the land from them illegally.  As well, once the complete wall is built it would have cost close to $1 Billion.
One wonders what can be done about this.  Some people choice advocacy - which can be very powerful.  People around the world need to know what is happening to the people of the west bank and gaza strip.  The best is having a first hand experience - seeing the empty tear gas shells, the humungous walls that divide houses of family members, the taking over of many green spaces, the brutality with which the people are treated.
It reminds me very much about the way the United States treated African Americans.  The way out of this mess may be the way of love, like that of Martin Luther.  If the Palestinians could rally around a leader that is committed to showing love to the oppressor, the walls could come down, the nation could be united.  If aggression is shown (even throwing rocks at walls) then it just seems that both sides truly hate each other.  If that hatred is not dealt with, no amounts of sanctions or advocation will help.  The Israelis (rightly or wrongly) feel that the land is theirs and try to take it away and they will play the victim card (which is why they have so much support from the International community).  They would never give up, for the government and the people are very committed to having the land - any threat is dealt with very harshly (and illegally).
One exciting non-profit organization that I had the chance to learn more about is Musalaha.  There website is at www.musalaha.org .  There mission is to - "promote reconciliation between Israelis and Palestinians as demonstrated in the life and teaching of Jesus. We seek to be an encouragement and facilitator of reconciliation, first among Palestinian Christians and Messianic Israelis, and then beyond to our respective communities."
One of the founders of this organization - Dr. Salim Munayer says the strategy os to bring both sides together and develop foundational relationships.  He states "I came to the conclusion that the theology of reconciliation was the best theology to deal with all these issues, and that more than anything else, the Jewish and Palestinian believers needed to be brought together, face to face. Anything less would not work, because of the dehumanization and demonization going on from both sides."
So what they do is pair Palestinians and Jewish believers together and send them out for a camping trip for three days (with facilitators).  Walls are brought down, barriers are crossed, and people become friends and are united.  It is small, it is ambitious, it is risky, and it is exciting!
While I was in Bethlehem, I was also able to tour the Church of the Nativity.  The church has a star in the basement that church tradition states is where Jesus came into this world as a baby boy.  It was amazing to be there!

Once out of the West Bank - at the checkstop we just had to show the front of my Canadian Passport out the window and they let us through - I met up with Chad and we did some errands and then hiked up the Mount of Olives.  The gate to the Garden of Gethsamane was closed so we were unable to go into the garden - just pass by.  But the view of Jerusalem from the top of the mountain was spectacular. 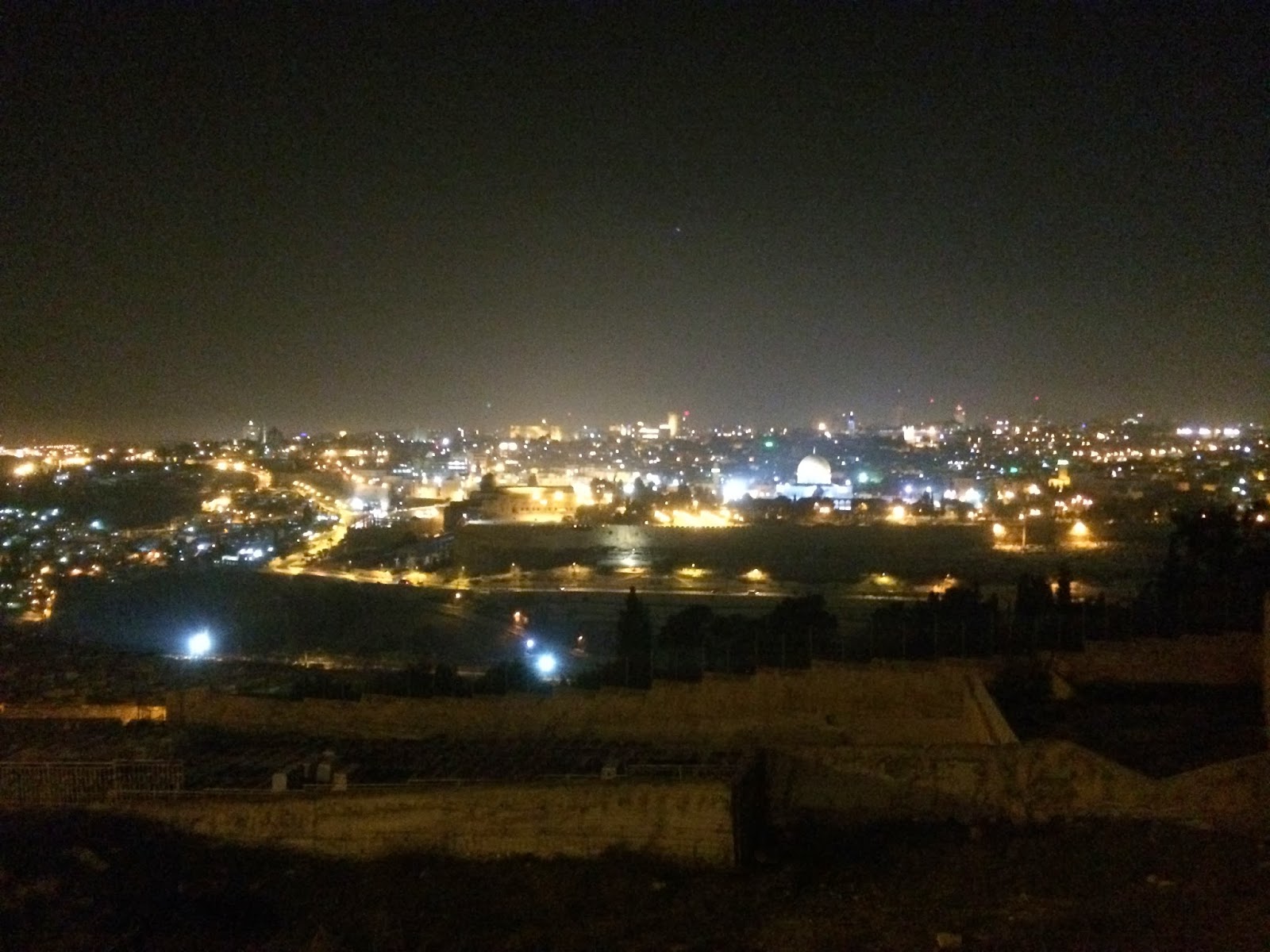