Here is a video that shows the move of a barn to the Youth Farm Bible Camp.  February 4, 2014 was a great day when a Hip Roof barn was moved to our complex.  We would like to thank Neufeld Movers for doing a great job!  We were expecting it to arrive sometime in the middle of the afternoon, but instead, it was here at noon.

Now that the barn is here, we have a work project that will be going on at different times this summer.  We are bringing water to the barn, electricity, a tin roof, new siding, and building a lean-to on the side of the barn.  The lean-to will be heated throughout the winter and will house all of our smaller Petting Zoo animals.

When we put new wood siding on the barn, we are hoping to get some volunteers coming out and helping with the project.  Let us know if you are interested by commenting below!!

As well, we are accepting donations for the barn project and all of our other summer camp initiatives.  To donate online, click here.

The most unique method of promotion or publicity employed by the MYS was undoubtedly the production of a film, “God Giveth the Increase.”  This was basically documentary film depicting the work of the MYS and centering particularly on the Mennonite Youth Farm.  This color film was produced by Wm. Zehr of the United States in 1957 and at a cost of $4,500.  The premiere showing took place at the Canadian Conference sessions in Saskatoon in 1958.  This project for which money was borrowed, turned out to be a losing proposition.  The film appeared to be more popular outside the province of Sask. than among MYS supporters.  If a copy could be located today, it would be an interesting and valuable record of a dynamic organization that no longer exists.

When Jesse Doell and I (Mark Wurtz) discovered this, we went to work trying to find out where this film would be.  The $4500 that the film costed would be $35,0000 in todays funds!!  An internet search of William Zehr found the following information:

Zehr (1909-1993) turned his childhood interest in movies into a career, starting Better Films Library and Productions in 1946 and making mostly evangelical films. In 1953, the General Conference Mennonite Church (GCMC) appointed Zehr to its new Film Committee, for which the first project was The Call of the Cheyenne, completed in 1955.

By 1960, Zehr had made five more films about Mennonite missions in Japan, Taiwan and North America. In addition, he made 25 movies on other topics such as lumbering in the Pacific Northwest.

In 1970, Zehr donated his collection—consisting of films he made or had a part in making as well as inventory from his film library—to the GCMC archives, which are now housed in the Mennonite Library and Archives at Bethel College. He retired to Schowalter Villa in Hesston about 10 years later.


I contacted Bethel College and asked about it but they were not sure.  The next time I sent an email and got a positive response.  They shipped the film to CINEPOST in Marietta, Georgia where the film was digitalized, and we received the digital copy in the mail the same day that the barn arrived.

It was a great job by CINEPOST and the video is a valuable historical resource.

The 2014 Premiere of the video "God Giveth the Increase" will take place on March 18 with showings at 5:45 and 6:30 at our annual Vereniki and Sausage Supper.  The supper will be at Rosthern Mennonite Church. 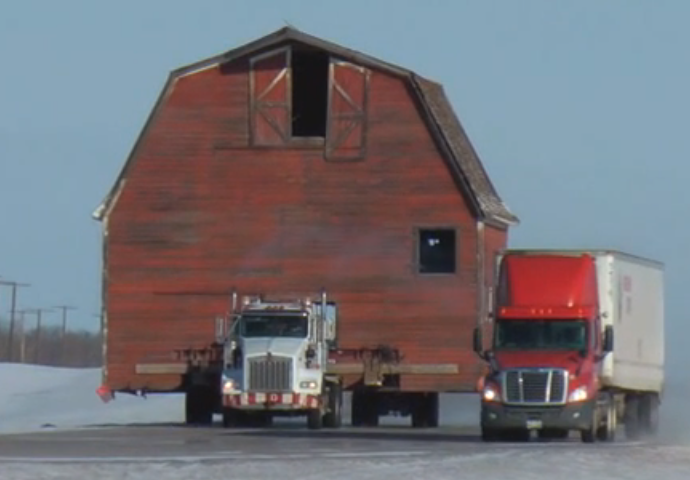